By Pep Moreno
Posted 01/07/2021
In News, Technical content
Fiction is the new reality III: Measurements Gap Fill LES2021-07-012021-07-01https://vortexfdc.com/wp-content/uploads/2018/12/vortexfdc-hd.svgVORTEXhttps://vortexfdc.com/wp-content/uploads/2021/07/fiction3.jpeg200px200px
As previously explained, measurements and modeling results are only pieces of a broken mirror that reflect the complex wind flow reality. On the one hand, observations are unavoidably limited in space and time: they refer only to wind at a few points or over short time periods (usually a few years or less). On the other hand -except in Garland’s splendid and perturbing series, Devs- model results are not yet considered reality but only a better or worse approximation to it. The quality of modeling is checked by comparing model results against measurements, however, the reverse statement may be also true due to the intrinsic nature of observations and the increasing quality of modeling.I have repeatedly argued that a sensible combination of measurements and model results seems the most desirable formula to assemble the pieces of the mirror. With the Vortex Gap Filling concept, we have tried to go a step further towards a hybrid concept by joining the best of the two worlds: the reality of observations with the 100% availability of model results.

The procedure is simple: wherever you have wind measurements with gaps, launch a Vortex LES for the same period. The synthetic data is then calibrated with the concurrent observations in order to identify recurrent patterns. Once the time series is trained, the existing gaps are filled with calibrated LES portions resulting in a complete mixed combination without missing values.

We are currently working with a number of clients to test Gap Filling for several cases around the world as part of an ambitious validation exercise.

Could the above-described hybrid data be a new standard for Wind Resource Assessment in the future? We are convinced it will, provided a clear distinction between observation and model is guaranteed within the final data. 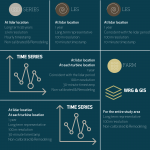