In my last post, I gave an example (presented at a recent NCAR’s workshop) of a cool How distracting our modelers (our researchers) from What is relevant for industry end-users (our customers). Later in the same workshop, I offered the following example of the opposite: relevant model results (What) that are useless for our customers since they don’t know How to use them.

In 2016, Vortex launched what was (up to my knowledge) the first commercial application of Large-Eddy-Simulation’s code WRF-LES for the wind industry. Before that launch, we took special care to ensure that the results of that so-called Vortex LES were relevant for our customers. Through an ambitious validation exercise, involving 100+ sites, we compared more than 200 years of synthetic wind data against actual measurements around the globe.

Since that launch, more than 1200 LES results have been requested and received by hundreds of Vortex users. As a fully applied research company, that continuous rhythm of requests is for us a valid metric to evaluate the importance of Vortex LES results to the end-users.

However, scratching a bit deeper shows that many of them are not exploiting these data to their full potential, which is ultimately kind of a failure for everyone. The raw output of WRF-LES is a 4+ dimensional block made up of 5000 time-series of a full-year length. Such a massive amount of data (up to 10Gb) cannot be processed by the software commonly used by wind resource engineers resulting in being underused.

Thus, we simplified that synthetic wind data for the end-users so they can be ingested by their programs. Consequently, although the original What was very powerful, the costumers simply don’t know How to use it.

So how can we overcome this issue? A new paradigm is needed for the Wind Resource Assessment community to move towards Wind Analysis in the Time-Domain. At Vortex, we are working specifically on this, via the BLOCKS concept still under development. However, we cannot do much alone. A wide consensus is needed for new advances in technology to be widely accepted.

Again, a stronger dialogue between research and industry will be key to this.

Atmospheric Challenges for the Wind Energy Industry Workshop – The GAP between modellers and end-users.Technical content 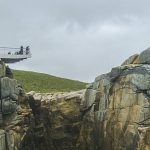