Time zones around the world are defined by using positive or negative offsets, corresponding to moving east or west to the Greenwich meridian (longitude=0). As each time zone is 1 hour apart, we could expect that in the world there were 24 time zones, however, several time zones are separated by 30 and 45 minutes, so the total number of time zones is 40.

A bit of history 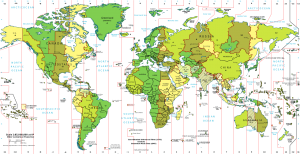 The Royal Observatory established the Greenwich Mean Time (GMT), the solar time at that location (Greenwich, London) as a way of reference to sailors to calculate their current longitude, knowing the difference between the time onboard, which was the solar time at that location, and the Greenwich Mean Time kept by portable timekeepers.

The Coordinated Universal Time or UTC was established in 1960 and it is the successor to Greenwich Mean Time. It is defined as the mean solar time at 0 degrees longitude. Since then, GMT is no longer a time standard but a time zone, although both share the same current time and are sometimes used incorrectly as synonyms. UTC is also known as Zulu time or simply Z.

Daylight Saving Time (DST) is the practice of moving the clock forward one hour during summer so that sunset occurs at a later time, observed by some countries and sometimes only in certain regions of countries. DST is also known as summer time.

Standard time is the local time of a country or region when Daylight Saving Time is not used. It is sometimes referred to as winter time. By definition UTC never adjusts for daylight saving time.

Computers generally set the date and time file attributes to local time. For the special case of weather observations, by convention they are taken in UTC, however, some sensors and data loggers can be configured to store the data in local time.

In case the time zone at which some measurements were taken is ignored, there are several ways to find out. If the observations include temperature, a plot of the diurnal cycle of this variable can give a clue to the timestamp reference. Another way is by comparing the measurements against synthetic data. If the simulated data is available at different time zones, the best correlation between the observations and the model will always be for the matching time zone. Some wind energy-related software even has a special feature to perform this test automatically.

The new Vortex interface is designed to download all the calculations in any time zone. By default, the corresponding local time zone is selected. The time zones are in standard time, that is, excluding daylight time savings. In case the measurements are made in local time with summer and wintertime, the timestamp for the summertime period must be changed first.